Apple made many announcements about products and features  at the annual WWDC opening keynote Among them they broke some news for developers. Apple announced that a paid account is now not needed at the development stage; it's only publishing to the iOS, OS X and Watch app stores that will require paid membership. Aspiring developers can thus develop and test apps on their own devices without having to pay. The change will be rolled out along with Xcode 7 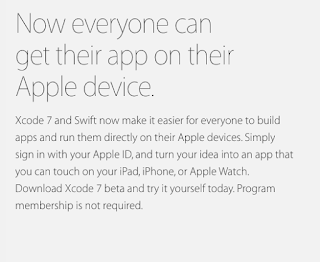 According to BoltClock♦ on http://stackoverflow.com,
Seven years after the inception of the App Store, Apple has finally introduced the new version of Xcode, Xcode 7, which will allow you to deploy and run any number of apps on any of your devices, simply by logging in with your Apple ID. You will no longer need a paid Program membership (and you certainly no longer have to jailbreak your device if you're not comfortable doing so).
Well, not for the majority of use cases anyway. For obvious reasons, certain capabilities and entitlements that require Program membership such as Game Center and in-app purchases will not be available to apps deployed using this method. From Apple's developer documentation:

The precise steps to getting your app onto your iOS device or Apple Watch follow immediately thus (screenshots omitted for ease of skimming):
Here is a brief explanation with screenshots 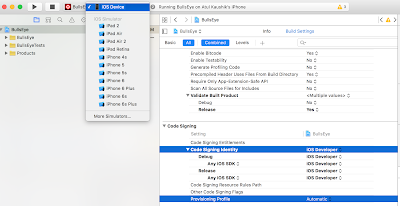 Prior to Xcode 7, a Program membership was indeed required in order to sign the provisioning certificates required to deploy apps to devices. The only other alternative was jailbreaking. With Xcode 7, you no longer need to jailbreak your device just to run apps distributed outside the App Store, or to test apps if you cannot afford to join the Program, or to deploy and use apps that you have developed for your own personal use if you do not intend to distribute them through the App Store (in which case you probably don't need the entitlements offered by Program membership anyway).

In another piece of news that will bring cheer to the community, Apple announced that its Swift development language will be going open source, as of the release of Swift 2. Swift was launched at the same event last year, and is being positioned as the "next big programming language", according to Craig Federighi, Senior Vice President of Software Engineering at Apple. Swift promises "baked-in security" and speed along with modern features.
Apple has stated that it will release the Swift source code including the compiler and standard library, and accept contributions from the community. A concrete timeline has not been laid out but Apple says it will do all this by the end of this year. Improvements in Swift 2 include better error handling, better support for older OS versions, protocol extensions and updated SDKs.

Promote Your Page Too